Up on the blog today, a fun card to add to the collection, a 1976 “not so missing” card for 18-year Major League veteran Denny Walling, who appeared in the first games of his Big League tenure during the 1975 season: 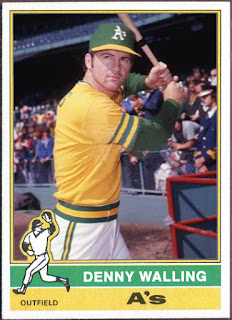 Walling played in six games for the Oakland A’s, hitting .125 with a hit over eight at-bats, that being a double that drove in two runs.
He would go on to put in a very nice 18-year Big League career that saw him play through the 1992 season, finishing up with a .271 batting average, with 799 hits over 2945 at-bats, most for the Houston Astros for whom he played between 1977 and 1988.
The most action he ever got in any one season would be 1986, helping the Houston Astros reach the National League championship series against the New York Mets, which was epic.
That season all Walling did was hit a career high .312 with 119 hits over 382 at-bats, the only time over his career he’d reach triple-digits in hits.
A man of all positions, Walling played all three outfield slots while also putting in substantial time at third base and first base, with third seeing the most action over his career.
Posted by Giovanni Balistreri/ WTHBALLS at 5:29:00 AM