Up on the blog today we have a “not so missing” 1971 card for former St. Louis cardinals pitcher Santiago Guzman, who played in parts of four seasons between 1969 and 1972: 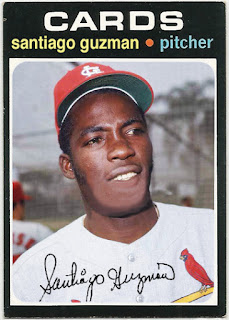 Guzman appeared in eight games for the Cardinals during the 1970 season, the most action he’d see in any of his Big League campaigns.
Over those eight appearances he posted a record of 1-1 with an earned run average of 7.24 in 13.2 innings of work, with three starts and a complete game thrown in.
Originally up in 1969 as a 19-year-old, Guzman appeared in only 12 games over his four seasons, with a high of those eight in 1970 when he picked up his only Major League win.
After pitching in the Chicago White Sox organization during the 1973 season, Guzman was out of Pro Ball for good, finishing up with an MLB record of 1-2 with an earned run average at 4.50 over 32 innings of work, all for St. Louis.
Posted by Giovanni Balistreri/ WTHBALLS at 5:25:00 AM