Been a long time coming, but I always wanted to draw up a 1970 card for Jim Bouton depicting him as a Seattle Pilot, though I did create a Houston Astros versions years ago since he finished the season with them in 1969. Nevertheless, here we go: 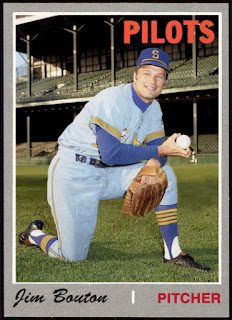 Bouton was coming off seven seasons with the New York Yankees when he was purchased by the new Pilots franchise in June of 1968.
While with the Yankees he had two great seasons in 1963 and 1964 before arm injuries kept him sporadic at best over the next four years.
As a Seattle Pilot, Bouton was used as a reliever, appearing in 57 games while going 2-1 with an earned run average of 3.91 before getting traded to the Houston Astros on August 24th of ‘69, where he appeared in 16 games before the season was done.
Of course, his somewhat brief tenure with the Pilots is forever immortalized in his landmark book “Ball Four”, with anecdote after anecdote of players, coaches and managers throughout his MLB career, and the Pilots had their fair share of characters.
For Bouton, he’d also pitch in 1970 before arm troubles ended his career, but not before making a surprising comeback at the age of 39 with the Atlanta Braves in 1978, appearing in what turned out to be the last five games of his career, all starts, as he went 1-3 with a 4.97 ERA.
All told, Bouton finished his career with a record of 62-63, with an ERA of 3.57 over 304 appearances, 144 of those starts, with 11 shutouts and six saves between 1962 and 1979.
Posted by Giovanni Balistreri/ WTHBALLS at 5:56:00 AM