TURN BACK THE CLOCK 1953: MICKEY MANTLE SENDS ONE INTO ORBIT! A 565-FOOT BLAST

Here’s a “Turn Back the Clock” card for something I was always fascinated with as a kid going through Baseball Digests and baseball history gems: Mickey Mantle’s 565-foot home run hit against the Washington Senators.
Check it out: 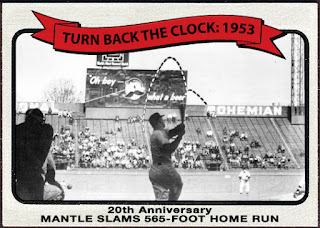 Mantle’s homer came off of Senators pitcher Chuck Stobbs at Griffith Stadium in Washington D.C. On April 17th of 1953.
It was THE homer that led to the phrase “Tape Measure Home Run”, since former Yankees public relations man Arthur Patterson claims to have measured where the ball landed to the edge of the stadium with an actual tape measure after retrieving the ball from a 10-year old boy.
Over the years many have claimed this story false, and that the ball could not have traveled that far.
Regardless, the monster shot hit the “Natty Boh” sign in straight-away centerfield and glanced off onto the streets behind the stadium, allegedly ina backyard on Oakdale Lane.
Many agree the ball did indeed travel about 500-feet, which is still a whopper of a homer, but it was the historical legacy the shot left behind, frequently showing up in baseball books and magazines for decades to come that made it so memorable, and added to the mythical stature of a guy named Mickey Mantle.
Posted by John23 at 8:21:00 AM

Email ThisBlogThis!Share to TwitterShare to FacebookShare to Pinterest
Labels: 1953, 1973, Mickey Mantle, Turn Back The Clock, Yankees