Recently a good friend of mine asked why I create so few Yankee “missing” cards.
Didn’t realize that I did, but I also suspect there weren’t as many Yankee players omitted from Topps sets as other teams.
Anyway, I did manage to finally find a usable photo of former Yankee infielder Len Boehmer, who could have been included in the 1970 Topps set.
Take a look: 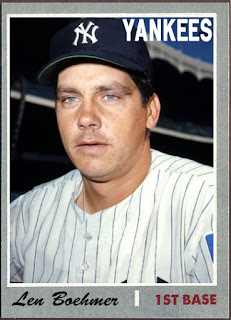 Boehmer’s career in the Big Leagues consisted of 50 games total, 45 of which were played out during the 1969 season, when he hit .176 with 19 hits over 108 at-bats.
He initially appeared in two games for the Cincinnati Reds in 1967, going 0-3, and then appeared in three games for the Yankees in 1971, going 0-5.
He DID actually get on a rookie card however, in the 1969 set along with Gerry Kenney in a late series, so he wasn’t totally left out of Topps’ world .

Posted by Giovanni Balistreri/ WTHBALLS at 7:49:00 AM