A FANTASY CARD IF THERE EVER WAS ONE: 1973 WARREN SPAHN

Allow me to indulge myself and present to you all a fantasy card I wish existed: a 1973 Warren Spahn “coach” card, even though they didn’t exist in that set. Take a look: 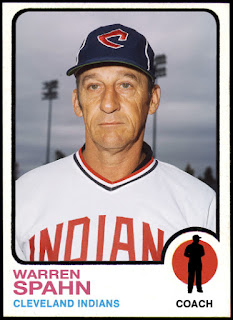 I came across this GREAT photo of Spahn when he was coaching for the Tribe and immediately knew I had to whip up a dedicated card for him, since he IS on the Indians Ken Aspromonte manager card.
I’ve always been a huge Spahn fan, so any chance to create cards for him is something I’ll jump at!
I mean, all the guy did was win 363 games, pitch 63 shutouts and post 13 20-win seasons, among other things!
And remember he didn’t win his first game until he was 25 years of age, as he served in the military from 1943 to 1945.
Just an incredible talent!
Look for some other “fantasy cards” of mine in the near future, like Mickey Mantle and Sandy Koufax...
Posted by Giovanni Balistreri/ WTHBALLS at 9:53:00 AM