Ending yet another week here on the blog, today we add the great Johnny Bench to my “Minor League Days” thread, celebrating perhaps the greatest catcher the game has ever seen: 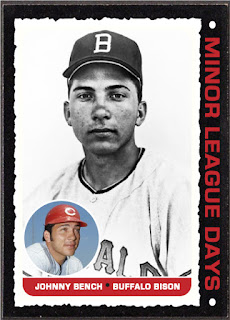 Bench was 19-years-old here, suited up for the Buffalo Bisons in 1967, his last Minor League stop before beginning his eventual Hall of Fame career towards the end of the season.
In 98 games for Buffalo, he hit .259 with 23 homers and 68 runs batted in over 344 at-bats before getting the call and making his debut with the Reds, appearing in 26 games as a teenager before the year was up.
Of course as we all know, he would go on to put together a career rarely seen by ANY player, let alone a catcher: TWO N.L. MVP Awards, 14 all-star games, 10 Gold Gloves, two home run titles and three RBI titles, all while donning the “tools of ignorance” for 17 seasons, all with the Reds.
As a kid growing up in the 1970’s, this man was a mythic figure, a “god”.