Sure, we have seen custom fantasy cards created for Dave Kingman’s crazy 1977 season created before, even San Diego Padre editions.
But I had to create and add them to my own collection of customs, so here goes: 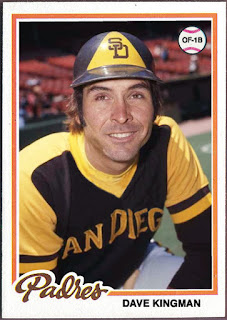 I plan on creating four different 1978’s for the former slugger, one for each of the teams he played for that 1977 Summer when he played for teams in each division of both leagues. Just nuts.
Kingman was coming off a 1976 season that saw him miss his first home run title by one when he slammed 37 homers for the New York Mets, just behind Philadelphia Phillies slugging titan Mike Schmidt.
Nevertheless, the Mets were about to clean house so to speak when they’d trade Kingman to the Padres, only to have the California Angels select Kingman off waivers some three months later, then to have the Angels trade Kingman to the New York Yankees nine days later for the September stretch run.
Throughout all of that, Kingman put in a decent year with all the havoc, hitting 26 homers and driving in 78 runs, hitting .221 over 132 games and 439 at-bats.
Of course, he’d find himself with the Chicago Cubs in 1978, on this way to hitting 48 homers in 1979 for his first home run title, then back to the Mets for three more seasons including his second homer title in 1982 with 37, before finishing up his career with three straight 30+ homer seasons with the Oakland A’s before retiring abruptly after a 35 homer campaign in 1986.
I was always fascinated with the three straight 30+ homer seasons followed by a sudden retirement, as I thought it was bad-ass of him to have done that when he clearly had some years left in his career, possibly en route to 500.
But as it was, he left the game with 442 homers, with the aforementioned two home run titles and a wacky 1977 season that made him the only player to ever play in all four divisions over the course of one year.
Posted by Giovanni Balistreri/ WTHBALLS at 6:20:00 AM