Today on the blog we have a “not so missing” 1978 card for former Houston Astros Outfielder Joe Cannon, who nade his MLB debut the previous season, albeit for only a handful of games: 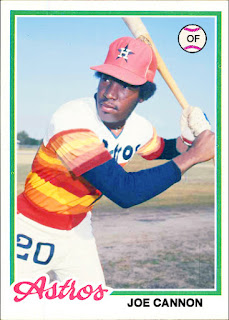 Cannon appeared in nine games for Houston in 1977, hitting .118 with two hits over 17 at-bats, with three runs scored and and RBI.
He would only appear in eight games the following season, collecting four hits over 18 at-bats, before getting traded to the Toronto Blue jays as part of the deal that brought Alan Ashby to the Astros.
In 1979 he played in 61 games, hitting .211 with 30 hits over 142 at-bats, scoring 14 and driving in 12, all career-highs.
In 1980, which would end up being his last on the Major League level, Cannon appeared in 70 games, though only collecting 50 at-bats, hitting only .080 with four hits in that time frame.
He’d spend another three seasons in the Toronto Minor League system before calling it a career, finishing up with a .176 batting average, with 40 hits in 227 at-bats over 148 games.
Posted by Giovanni Balistreri/ WTHBALLS at 5:29:00 AM