Here’s a “not so missing” 1976 card for former Los Angeles Dodgers pitcher Dennis Lewallyn, who made his Big League debut a season earlier: 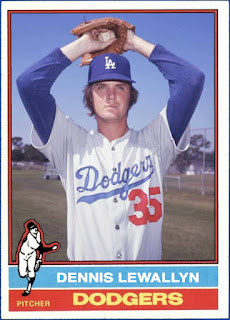 Lewallyn appeared in two games for the Dodgers, pitching three scoreless innings at the age of 21, allowing only one hit.
He appeared in four games during the 1976 season, posting a record of 1-1 with a nice 2.16 earned run average over 16.2 innings of work.
The 1977 campaign would go on to be the most action he’d see over his eight-year Major League career, albeit still a small amount in the grand scheme of things, as he’d pitch 17 innings over five appearances, with a 3-1 record and 4.24 ERA for the National League champs.
After two seasons of appearing in one and seven games respectively, he’d pitch one season with the Texas Rangers in 1980, appearing in four games, then moving on to the Cleveland Indians, for whom he’d pitch the last two seasons of his career, appearing in 11 combined games between 1981 and 1982.
Overall, Lewallyn appeared in 34 Major League games, with a 4-4 record and 4.48 ERA over 80.1 innings pitched, starting three of those games and finishing 15.
Posted by Giovanni Balistreri/ WTHBALLS at 6:00:00 AM