I have been searching for a good image of Roger Freed during his time with the Philadelphia Phillies for so long I had pretty much given up at this point, then this beauty comes my way, allowing me to finally create a 1973 “Missing” card: 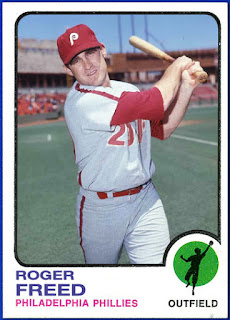 The promising slugger appeared in 73 games for the Phillies in 1972, hitting .225 with six homers and 18 runs batted in over 129 at-bats, with 29 hits.
He’d put up some big time stats in the Minors during his pro career but never get a decent shot at the Big League level.
He’d spend all of 1973 in the Minors, and only have six appearances for the Cincinnati Reds in 1974, with another full season back in Triple-A in 1975 before appearing in eight games with Montreal in 1976.
In the Minors that year all he did was hit 42 home runs while driving in 102 runs, and this was only over 398 at-bats and 122 games!
All that did for him was get drafted by the St. Louis Cardinals in the 1976 Rule 5 Draft and get part-time play over the next three seasons, which would be the final three years of his Big League career before finishing up with one last season in the Minors in 1980.
Originally signed by the Baltimore Orioles, he put up some great years in the Minor Leagues between 1966 and 1970, hitting as many as 31 homers and driving in as many as 130 runs, while also hitting as high as .334, all while in his early 20’s.
Posted by Giovanni Balistreri/ WTHBALLS at 5:46:00 AM