Up on the blog today we have a “not so missing” 1979 card for former reliever Ed Farmer, who made it back to the Majors after struggling for a few years, now with the Milwaukee Brewers: 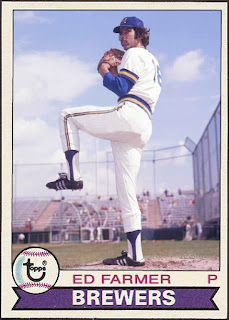 Farmer, who was originally up to the Majors in 1971 with the Cleveland Indians but eventually spent all of 1975 and 1976 in the Minors before one appearance with Baltimore in 1977, appeared in three games for the Brewers in 1978, going 1-0 with a sparkling 0.82 earned run average over 11 innings.
It was indeed the beginning of a comeback for the righty as he went on to play for another five seasons in the Big Leagues, even making the American League All-Star team in 1980 when he had his best season, saving 30 games for the Chicago White Sox, pitching to an ERA of 3.34 over 64 appearances.
By the time he retired after the 1983 season he finished up with a record of 30-43, with 75 saves over 370 appearances and 624 innings pitched over 11 Major League seasons.
Posted by Giovanni Balistreri/ WTHBALLS at 5:58:00 AM