On the blog today, another in my "Stars Retire" thread, this time a 1974 edition celebrating the careers of recently retired Willie Mays and Luis Aparicio: 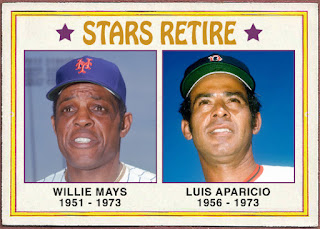 To start, Major League baseball saw one of the greatest ever, Willie Mays, call it a career after finishing up where it all started, New York, with the Mets with whom he made it back to a World Series before losing to the three-peat Oakland A's.
Really, at this point what else needs to be said about arguably the best all-around player in baseball history. 3000+ hits, 660 homers, 1900+ R.B.I.'s., 1951 Rookie of the Year and N.L. M.V.P. in 1954 and 1965. But he was much more than just stats. He was the "Say Hey Kid".
By the time the 1970's hit, he was a walking legend of the sport, and being enshrined in the Baseball Hall of Fame in 1979 was the cherry on top of it all.
Along with Mays, the great Luis Aparicio hung up the cleats after a wonderful career that saw him become one of the great base-stealers of his era.
He actually wrapped up his playing days by the end of the 1973 season, but Topps (for a change) went ahead and issued a card for him in their 1974 edition. So we were given an "accidental" career-capper" with his final Topps card.
From the moment Aparicio made it to the Majors in 1956 with the Chicago White Sox, he was a star.
He took home the A.L. Rookie of the Year that season, and proceeded to be an all-star player for most of his 18-year career.
Between 1956 and 1964, nine consecutive years, he led the American League in stolen bases every single season!
As a member of the "Go-Go" 1959 Chicago White Sox he finished second to teammate Nellie Fox for Most Valuable Player, and he'd go on to win nine Gold Glove Awards before hanging up the spikes.
All told he suited up for the White Sox, Baltimore Orioles, and Boston Red Sox for the final three years of his illustrious career.
By the time he retired the numbers were solid: 2677 hits, 1335 runs scored, 506 stolen bases and over 10000 at-bats!
It took a few years on the ballot, but he was finally inducted into the Hall of Fame in 1984.
Two giants of the game finishing up Hall-worthy careers, celebrated on this one card.
Hope you enjoy them!
Posted by John23 at 6:29:00 AM