Today on the blog, a "Special Request" card for my buddy Max Effgen, a "not quite missing" 1981 card for 21-game Major League outfielder Gary Cooper of the Atlanta Braves: 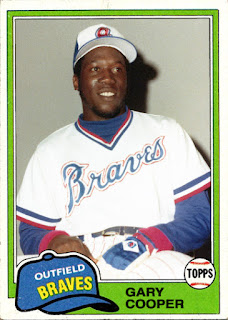 Cooper played out what was the entirety of his Big League career over the Summer of 1980 with Atlanta, collecting only two plate appearances while scoring three runs and stealing two bases.
By then he put in six seasons in the Braves Minor League system, before returning there in 1981, then calling it a career.
Over that time he stole 211 bases while hitting .234, with 647 hits in 2760 at-bats, scoring 446 runs spread across rookie-ball and Triple-A.
But for a few months during the 1980 season, he reached the pinnacle of the baseball world, playing as a Major Leaguer!
Cheers!
Posted by John23 at 6:07:00 AM