HIGHLIGHTS OF THE 1970's: MAJOR LEAGUE BALL COMES TO SEATTLE

I don't know why it has taken me so long to create a 1970 "Highlight" card celebrating Major League baseball coming to Seattle, but I fix that today with the following card: 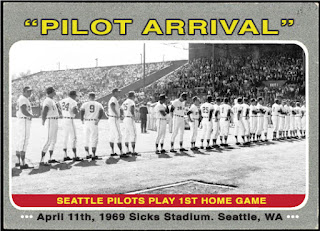 I have already created other such cards for the Montreal Expos (1970), Texas Rangers (1973) and Milwaukee Brewers (1971), so why the Pilots cards escaped me I have no idea.
Funny I bring up a 1971 card for the Milwaukee Brewers, since as we all know that is the franchise that was born from the mess that was the Seattle Pilots endeavor, as the Pilots lasted only one season as a Big League team before a last-minute deal with Milwaukee car-dealer Bud Selig before the 1970 season led to a hasty relocation to the Brew-city.
The team went 64-98 in their only season, led by manager Joe Schultz, with their top players being Don Mincher, Tommy Harper and Tommy Davis.
On the pitching side of things, Diego Segui put in a good year, going 16-6 mainly out of the bullpen, with starter Gene Brabender leading the team with 13 wins, seven complete games and 139 strikeouts.
Of course, thanks to pitcher Jim Bouton, who appeared in 57 games as a reliever for the team, we were also left with hilarious stories of the tumultuous season because of his landmark book "Ball Four", giving us insight into the personalities that made up the squad.
If you STILL have not read it, please do yourself a favor and get to it!
There's so much I can get into here, but for a more rudimentary quick read on the team and that 1969 season, here's the Wiki-link:
https://en.wikipedia.org/wiki/Seattle_Pilots
Posted by John23 at 5:58:00 AM