Thought it'd be fun for you "newer" blog followers to see an older blog post today, this one from October of 2014, my 1976 "traded" card for uber-star Reggie Jackson: 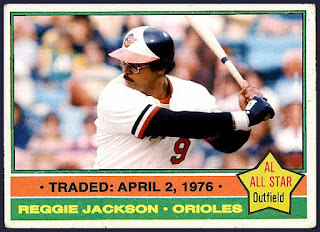 I wanted to try something different from what Topps did for their traded sub-set, a set I was never a fan of.
Since I've always been a sucker for horizontal lay-outs, I tried it with the 1976 template and this is what I came up with.
Here's the original write-up from that post:
"This is my second card (following the 1977 Tom Seaver) in my "Traded" sub-set, creating cards of players that were traded before Topps could get them on the correct team by Opening Day.
As we all know, Reggie was traded by the Oakland A's right around the start of the 1976 season to the Baltimore Orioles.
And even though we were left with what is STILL one of my all-time favorite cards, that '76 card of Reggie would have been nice to have depicted him on the correct team.
There are a lot of really takes on this out there, for sure. Hope you all think this one is an adequate addition to them as well!"
Posted by John23 at 5:57:00 AM