Today’s blog post has a 1976 “Then and Now” Super Veteran card for three time batting champion Tony Oliva of the Minnesota Twins, who wrapped up a wonderful career that season: 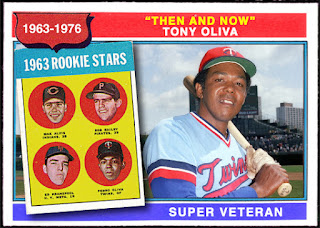 Even though Oliva played out the 1976 season as a player-coach, I don't think he officially stated that it would be his last season as an active player.
But Oliva established himself as possibly the second best Twins hitter ever at that point (behind Rod Carew), and would retire with a .304 career average, 220 homers and just under 2000 hits (1917) in his 15 year career.
Oliva was well on his way to the Hall of Fame until injuries derailed his Cooperstown march once he reached his 30's.
He burst onto the Major League scene in 1964 when he easily won the American League Rookie of the Year award.
In that year, all he did was lead the league in batting, hitting .323, while slamming 32 homers with 94 runs batted in.
He also lead the league in runs scored with 109, hits with 217, doubles with 43 and total bases with 374!
Those numbers also got him a fourth place finish in M.V.P. voting as well.
The following year there was no sign of a sophomore jinx, as he once again lead the lead in batting, this time hitting .321, with 16 homers, 98 R.B.I.'s, 40 doubles and 107 runs scored.
He also lead the league in total hits again, this time with 185.
All told in his career, Oliva would win three batting titles (the third coming in 1971 when he hit .337), and would lead the league in hits five times, slugging once (1971), get named to eight straight all-star teams, and have two second-place finishes for M.V.P., in 1965 and 1970.
I wouldn't say his final numbers warrant a Hall of Fame spot for Oliva. But I'll admit that you can argue a good point for it with the career he left us with, and come 2022 he would be selected for a spot in Cooperstown, which is just fine with me!
When you really take a look, he only had 11 full seasons in the Majors, with the half-season in 1976 and three pretty much non-existent years in 1962, 1963 and 1972.
So his numbers carry a bit more weight in that light.
And wow, what a great hitting combo he and Rod Carew made for the Twins, huh?!
Nice 1-2 punch right there.