On the blog today, adding the Cleveland Indians flamethrower Sam McDowell to my long-running 1971 "Minor League Days" thread, something I haven't done in a while: 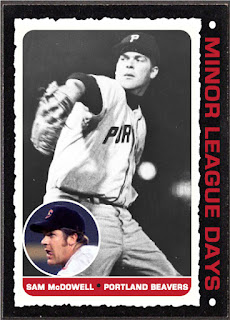 McDowell is shown here as a member of the Portland Beavers in 1964, his last stint in the Minors before sticking in the Big Leagues for good, establishing himself as one of the premier strikeout pitchers of the era.
He did not disappoint the Portland fans in his short nine-game tenure with the team, starting nine games, completing seven of them, with five of those games shutouts, going 8-0 with a miniscule 1.18 earned run average over 76 innings, collecting 102 strikeouts! Just dominant!
Once called up he'd continue with his performance, going 11-6 for the Cleveland Indians over 31 appearances, 24 of them starts, posting a very nice 2.70 ERA over 173.1 innings, with two shutouts and 177 strikeouts at only 21 years of age.
Over his 15-year career he was at times unhittable, six times topping 200 strikeouts, two of those seasons saw him top 300.
He’d go on to lead the league in K’s five times during his amazing run between 1965 and 1970, along with a 20-win season in 1970 and a career low 1.81 ERA in the “Year of the Pitcher” 1968.
It’s a shame he only had ten full seasons during his career, seeing as he ended up with 2453 career strikeouts with a 141-134 record and a nice 3.17 ERA.
Once he was traded to the San Francisco Giants for Gaylord Perry after the 1971 season his career went downhill quickly, barely hanging on the final four years before retiring after 1975.
Nevertheless between 1964 and 1971 he was a monster on that mound, striking fear in opposing batters while racking up the K’s and getting named to six all-star teams.
Posted by John23 at 7:18:00 AM