Today we go an add former thumper George Scott of the Milwaukee Brewers to my long-running 1975 "In-Action" thread: 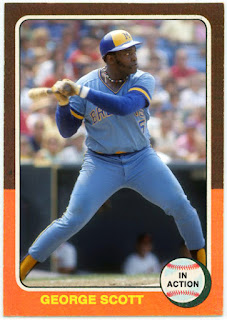 Scott was right in the middle of an impressive career-run by 1975, on his way to a home run title, hitting 36, with a league-leading 106 runs batted in and 318 total bases, as well as his seventh Gold Glove for his defensive work at first base.
All those numbers would get him an eight-place finish for the MVP Award by season's end, MVP attention that he'd receive for the fifth straight year at that point.
Overall he put together an excellent career playing for the Red Sox, Brewers, Royals and Yankees between 1966 and 1979, slamming 271 home runs with 1051 RBI's, 1992 hits and a .268 batting average.
Defensively all he managed to do was take home eight Gold Gloves for his work at first base, and though he was only named to three all-star games, he garnered MVP attention in seven seasons, or half his career!
Not too shabby to say the least...
Posted by John23 at 6:03:00 AM