The next 1971 "Baseball's Greatest Moments" card added to my custom "extended set" is a card celebrating Hall of Famer Jim "Catfish" Hunter and his 1968 perfect game: 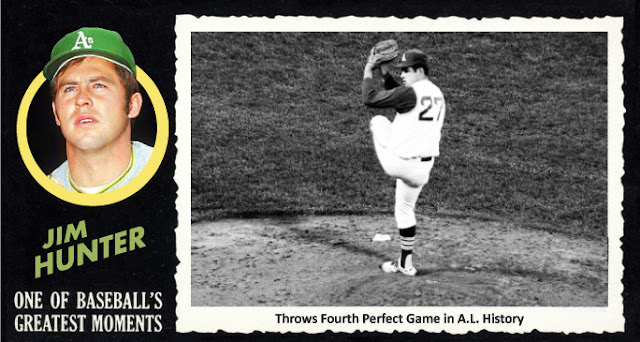 On May 8th of that year, one year and one day before I was born FYI, Oakland A's starter Jim Hunter took the mound against the heavy-hitting Minnesota Twins, a line-up that featured THREE future Hall of Famers in a row in Rod Carew, Harmon Killebrew and Tony Oliva.
It was only the 25th game for the Oakland franchise after moving there from Kansas City, and the scant 6,300 fans were treated to history, as Hunter ended up tossing the ninth perfect game at the time in MLB history, beating the Twins 4-0 at Oakland-Alameda County Stadium.
Hunter struck out eleven batters, including the last two of the game, with only two batters even reaching a three-ball count: Tony Oliva in the second inning and the final hitter of the game, pinch-hitter Rich Reese, who actually fouled-off five straight 3-2 pitches before whiffing.
It was actually the first regular season perfect game in the American League since 1922, when Chicago White Sox pitcher Charlie Robertson accomplished the feat, and first no-hitter in the Athletics franchise since the Philadelphia days, when Bill McCaha threw a no-no in 1947.
Incredibly, what is often forgotten is that the star HITTER of the game was Hunter himself, as he went 3-for-4 at the plate with three runs batted in!
Just amazing!
The game took a nice 2:28 minutes to complete, and really introduced the budding ace to the rest of the baseball world, as he would become a perennial 20-game winner, 1974 Cy Young recipient, and five-time champion before retiring in 1979.
Posted by John23 at 6:09:00 AM