The next 1963 "Lost" Fleer card from my custom set released a few months back to get the spotlight is my card for perhaps the MOST underappreciated player the game has ever had, St. Louis Cardinal legend Stan Musial: 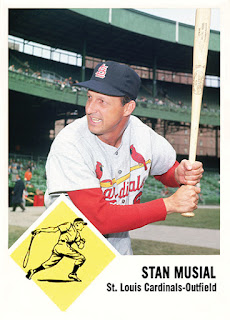 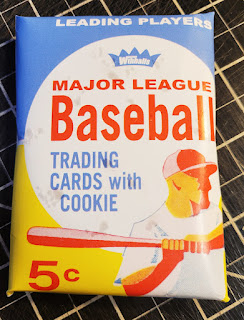 For Musial, his MLB numbers are just absurd: seven batting titles, two R.B.I. titles, five triples titles and eight doubles titles, with career numbers of 475 home runs, 1951 runs batted in and a .331 career average. Throw in his 725 doubles, 177 triples and 3630 hits along with 1949 runs scored and the numbers are staggering.
And don't forget that Musial also lost a year to military duty, easily putting him over 500 homers, close to 3900 hits and around 2100 runs batted in if he played in 1945.
Along with the great Frank Robinson I always felt Stan Musial was often overlooked in the decades since his playing days ended.
When talk of "Greatest Living Player" came up it was always Williams, DiMaggio, Mays or even Aaron that would come up. But Stan Musial would always kind of be that after-thought.
Criminal.
Three Most Valuable Player Awards, FOUR second-place finishes, including three in a row between 1949-1951, and twenty consecutive all-star appearances, Musial definitely is a member of that rarified stratosphere of baseball royalty along with the likes of Ruth, Cobb, Mays and Wagner, among others.
Posted by John23 at 5:57:00 AM