On the blog today, we move on to the top National League firemen of the 1974 season, represented on a 1975 “expanded league leader” card in my on-going thread: 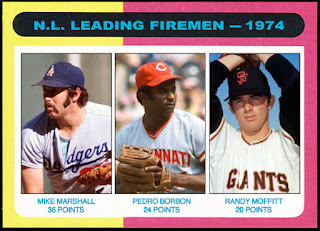 Of course, we begin with the top reliever on EARTH for 1974, Mike Marshall of the Los Angeles Dodgers, who not only took home the N.L. Cy Young Award for his record-breaking season for the ages, but arguably could have been the MVP as well.

He pitched an astounding 208.1 innings all out in relief, finishing 83 games, just over HALF the team’s games!

Behind him with 24 points in second place was Cincinnati Reds reliever Pedro Borbon, who saved 14 games while winning ten, with 73 appearances for the burgeoning “Big Red Machine”, finishing with an ERA at 3.24 over 139 innings, also all out of the bullpen.

Borbon really was an unheralded steady arm for the Cincinnati Reds through the 1970’s, at one point reeling off six straight seasons of over 120 innings pitched between 1972 and 1977.

In third place with 20 points, San Francisco Giants reliever Randy Moffitt, who saved 15 games while winning five, pitching to an ERA of 4.50 over 61 games and 102 innings.

Moffitt, brother of tennis legend Billie Jean King, would pitch for the Giants through the 1981 season, another unheralded arm out of the bullpen that served his team well for years.

Well, there you go!

Next week, the American League’s top relievers of 1974.