Today on the blog I start a brief thread on a subject that quite frankly, I'm surprised took me so long to do, a highlight card for each All-Star game between 1969 and 1978, so I can create cards for all Topps sets between 1970 and 1979.

We begin with a 1970 "All-Star Highlights" celebrating the 1969 Midsummer Classic: 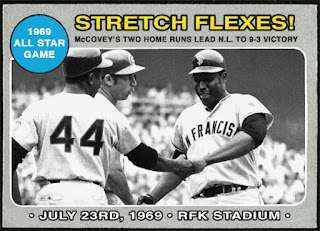 You can say that the game, which took place at RFK Stadium in Washington DC, was the "Willie McCovey Show", as the big man went 2-for-4 with two home runs and three runs batted in for the National League.
Two other N.L. starters also collected two hits apiece (Johnny Bench & Matty Alou), while Felix Milan of the Atlanta Braves went 1-for-4 with two RBIs, but "Stretch" was clearly the star of the show on this day, helping the Senior Circuit win 9-3, with Hall of Famer Steve Carlton picking up the win.
Hometown fan favorite Frank Howard did not disappoint, as he'd hit a homer in the second inning off of Carlton for the American League's first run of the game.
Blue Moon Odom of the Oakland A's got hit hard, allowing four earned runs and five hits in just a third of an inning, though starter Mel Stottlemyre of the New York Yankees took the loss, giving up the initial three runs (two earned) over the first two innings of the game.
Next up on the thread, the 1970 All-Star game and the unforgettable ending that of course made the front of the card...see you then!
Posted by John23 at 8:17:00 AM