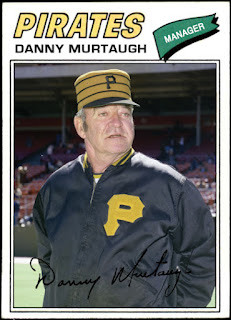 Murtaugh passed away in December of 1976, after a season which saw him guide the Pirates to a second place, 92 win season after two straight first place finishes in the National League East in 1975 and 1975.
He began his managerial career in 1957, and would go on to lead the Pirates through 1976 with gaps in 1965-1966, 1968-1969, and 1972.
Overall he led the team to five first place finishes, with two championships, the first in 1960 when the Pirates stunned the favored New York Yankees, capped off by Bill Mazeroski's Game Seven ninth-inning walk-off, and the second when they beat the defending champion Baltimore Orioles.
His final numbers as a manager, he finished with a record of 1115 and 950, good for a .540 winning percentage.
Battling ailments including heart issues throughout his managerial career, he sadly suffered a stroke and passed away at the age of only 59, just two months after retiring.