On the blog today, capping off former pitcher Gary Jones and his brief two-year Big League career with a "not so missing" 1972 card: 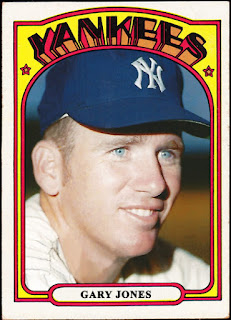 Jones originally came up to the Majors in 1970, appearing in two games for the New York Yankees, tossing two innings and pitching shutout ball with two strikeouts as a 25-year-old.
In 1971 he was back, appearing in 12 games, again all out of the bullpen, this time getting hit hard over his 14 innings, allowing 14 runs for a bloated 9.00 earned run average, striking out 10 while walking seven.
He would spend all of 1972 in the Cleveland Indians Minor League system, appearing in 40 games, but would call it a career by season's end.
All told, he finished his Major League career with 14 appearances, no decisions, and a 7.88 ERA over 16 innings of work.
Posted by John23 at 5:40:00 AM