Thought it'd be fun to revisit a post from just over eight years ago here on the blog, where I redid the 1972 "Minor League Player of the Year" special with an actual image celebrating the player so honored in 1971, Bobby Grich: 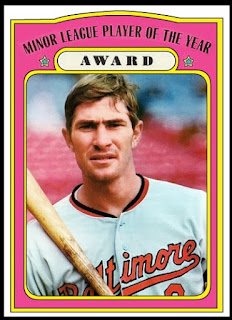 For those of you who don't remember the somewhat bland sub-set, here's the original as issued by Topps: 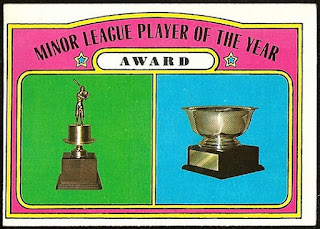 "Again, not that attractive a card, and something that NEVER would have happened later on when "rookie-mania" took hold in the late 80's! But nevertheless, it WAS cool that Topps had such a card for minor league awards. Would have been nice if they kept such a practice in place.
Now, not that you would have any idea who actually won the award(s) unless you scanned the back of the card, but the 1971 Minor League stud was none other than future all-star second baseman Bobby Grich, then of the Baltimore Orioles.
So with that, I went and redesigned the card with Grich as the subject, not the awards themselves.
I had to totally recreate the whole card, and make it a portrait orientation to accommodate the photo used, but I think it still came out ok, no?
As for Grich himself, before carving out an excellent Major League career, he had a monster 1971 season playing for the Orioles' Triple-A farm club in Rochester.
In 130 games as a shortstop, Grich POUNDED the International League, hitting .336 while smashing 32 homers with 83 runs batted in and 124 runs scored with 299 total bases.
These were NOT middle infielder numbers you often saw during the 1960's and 1970's!
And it was for those numbers that Grich was a solid pick for Minor League Player of the Year.
Once he jumped to the Majors for good in 1972, he became one of the best second baseman in the game for the rest of the decade, considered one of the best fielders at his position, winning four Gold Gloves as well as leading the league in putouts, double-plays and assists multiple times.
But he was no slouch at the plate, as he retired with almost 2000 hits, 224 homers, 1000+ runs scored and 864 runs batted in after seven years in Baltimore and ten years in California as a member of the Angels before hanging them up after the 1986 season.
It's funny how initial perception stays with you. My first over-the-top maniacal card-collecting year was 1977, and the guys that were designated as "All-Stars" on their cards remained somewhat legendary to me, and Grich was one of them.
Even though later on I learned the game and understood where guys like Toby Harrah, Ron LeFlore and even Grich stood as far as "star players" were concerned, those 1977 "All-Star" cards stayed with me to this very day, giving those players and extra bit of status that never faded after almost four decades.
Next up on this "awards" sub-set thread: card #625, "Rookie of the Year".
Keep an eye out for it in the near future…"
Posted by John23 at 5:25:00 AM