The next card from my "Whole Nine" set released last year to get the spotlight here on the blog is my "missing" 1965 card for enigmatic slugger Tony Horton: 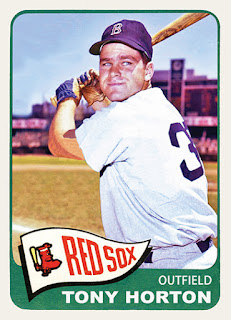 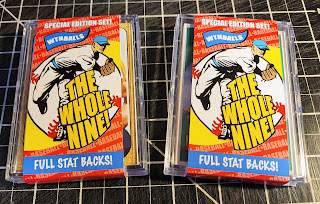 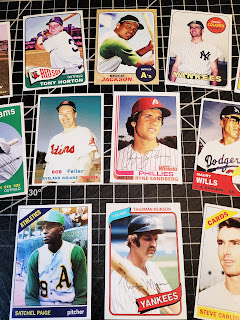 Horton originally came up with the Boston Red Sox in 1964 as a 19-year old, appearing in 36 games, hitting .222 with a homer and eight runs batted in.
After a couple of more sporadic seasons bouncing between the Majors and Minors with Boston, Horton was traded to the Cleveland Indians in 1967 for pitcher Gary Bell, and finally got some full-time work with the parent club.
After a couple of decent years he really came into his own in 1969, hitting .278 with 27 homers and 93 runs batted in on 174 hits in 625 at-bats.
1970 started out well for the young slugger, as he had a three-homer game against the Yankees as well as hitting for the cycle on July 2nd against the Orioles, but after a prolonged slump and constant booing from the fans, the emotional toll finally came to a head for Horton as he took himself out of a game on August 28th against the Angels.
It was the second game of a double-header, and he voluntarily left the game after the fifth inning.
Sadly, later that evening he attempted suicide, but luckily survived and eventually got treatment for his problems.
But as for his baseball career, he'd never appear in another Major League game again.
His former manager, Alvin Dark, stated that in his long baseball career, the Horton situation was the "most sorrowful incident I was ever involved in, in my baseball career."
Tony Horton was only 25 years old when he left the game, after only 636 games and seven years, and has always been a stark reminder of the pressures professional athletes have day to day that fans can easily overlook as they're entertained on an almost nightly basis for six-motnhs out of every year.
Posted by John23 at 6:09:00 AM