Thought it'd be fun to give former pitcher Ken Brett a do-over for his 1974 Topps card, which originally showed him airbrushed into a Pittsburgh Pirates uni after coming over from the Philadelphia Phillies: 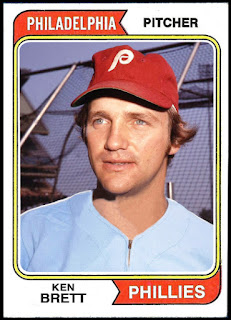 So here we have a 1974 card for Brett showing him with the team he suited up for in 1973, the Phillies, for whom he went 13-9 over 31 appearances, 25 of those starts, with 10 complete games and a shutout thrown in.
For those that need a refresher on the original Topps had out there, here you go: 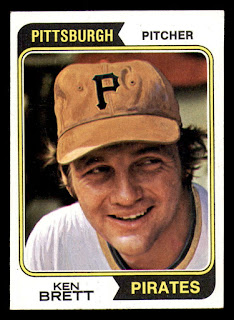 Brett was traded over to the West side of Pennsylvania from the Philadelphia Phillies for Dave Cash. Somewhat of a lopsided trade as Cash gave the Phils a guy who’d get on base on front of sluggers Mike Schmidt and Greg Luzinski.
Brett on the other hand would win 22 games for the Pirates over two seasons before heading to the Bronx as part of the Doc Medich/Dock Ellis/Willie Randolph big swap in December of 1975.
Nevertheless he did put in a solid 14 years in the Major Leagues, retiring after the 1981 season and 349 appearances.
He wound up with an 83-85 record playing for 10 teams between 1967 and ’81, starting just under half of his games.