Today something special here on the blog, as I came across this incredible image of an uncut 1977 printing sheet, with some obvious early drafts of cards that ended up differently when released. Really some amazing stuff: 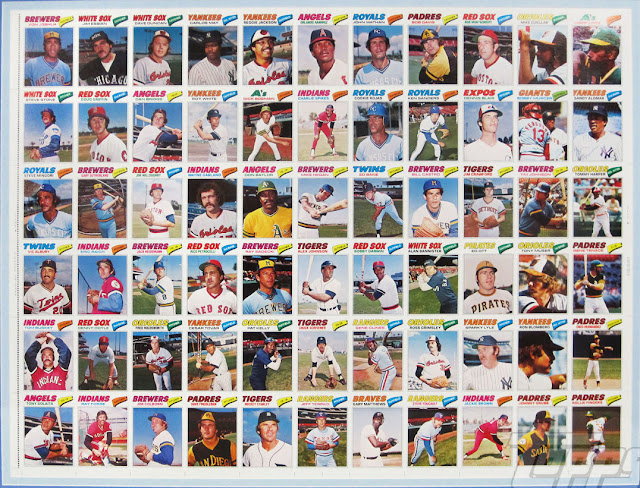 Now, I do plan on doing a more focused close-up spotlight on these in the future, “zooming in” so to speak and looking at the variations more closely, but for today I wanted to share this sheet image for those that appreciate the 1977 set and what was originally mocked up before release.

For starters, of course there’s the ever famous Reggie Jackson card that shows him suited up with the Baltimore orioles, though called out on the card as a New York Yankee player after his Free Agency signing.

Some of the other variations that were later swapped out: Steve Stone, called out as a Chicago White Sox player though clearly dressed in Cubs attire; an incredible looking Gene Tenace card, with him still an Oakland A’s player on a San Diego Padre card; same for Hall of Fame reliever Rollie Fingers on the lower right. You can also see that the final “stage” of applying facsimile autographs wasn’t applied yet.

Hope you enjoy this image as much as I do!

Keep your eyes open here on the blog for focused posts on individual cards here.
Posted by John23 at 5:47:00 AM