Up on the blog today we have an expansion do-over for Tommy Smith and his 1977 card, originally showing him in an airbrushed Seattle Mariners uni in expectation of the upcoming inaugural season for the new franchise: 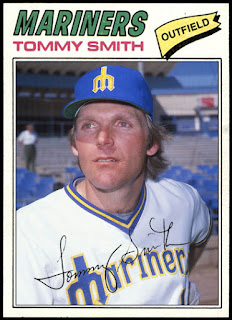 Understandably up against the wall, Topps had to scramble for both the Mariners and Toronto Blue Jay players in advance of their first seasons as member of the Major Leagues, which led to some classics as we all know.
Smiths wasn't one of the worst by far, but for those who don't remember the original, here you go: 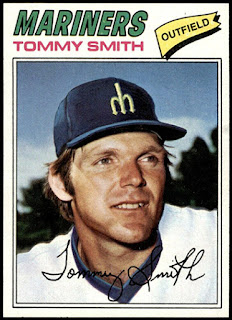 In November of 1976 he would be drafted by the new Seattle Mariners organization as part of the expansion draft, where he would go on to play the last games of his career, 21 to be exact, where he hit .259 with seven hits in 27 at-bats.
In 1976 he’d see the most playing time of his five Major League seasons, appearing in 55 games for the Cleveland Indians, while hitting .256 with 42 hits in 164 at-bats, driving in 12 runs and scoring 17 himself.