Up on the blog today we have a 1978 "not so missing" card for two-year Big League pitcher Manny Seoane, who made his Big League debut in 1977 as a member of the Philadelphia Phillies: 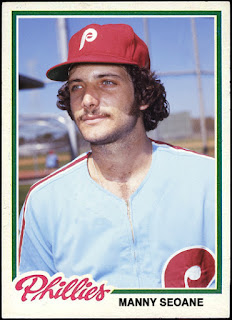 Seoane appeared in two games for the Phils that year, not factoring in a decision while posting an earned run average of 6.00 over six innings of work.

The following season he would find himself on the North Side of Chicago as a member of the Cubs, where he would appear in seven games, finishing with a record of 1-0 with a 5.40 ERA in 8.1 innings pitched.
Still only 23, he would spend the next three years in the Minors before calling it a career after the 1981 season.

For his brief career, Seoane finished with a record of 1-0, with an ERA of 5.65 over nine games and 14.1 innings between the Phillies and Cubs.