On the blog today, we go and give Keith Moreland a "not so missing" 1979 card, after he made his MLB debut with a single game during the 1978 season: 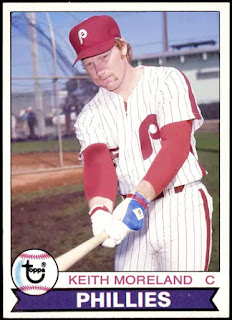 Moreland went 0-2 at the plate in that debut, while putting in time behind the plate as catcher.
Of course, over the course of his career Moreland would put in time in the outfield, infield, just about anywhere his team needed him!
He would end up playing through the 1981 season with the Phillies before moving on to the Chicago Cubs where he would get solid playing time, giving the Cubs some very good seasons along the way.
His finest season would have to be 1985 when he drove in a career-best 106 runs, with a .307 average and 180 hits, also career-highs.
He would go on to play for the San Diego padres in 1988 before one last season split between the Detroit Tigers and Baltimore Orioles in 1989.