On the blog today, we have a "not so missing" 1975 card for former San Diego Padres pitcher Joe McIntosh, who made his MLB debut in 1974: 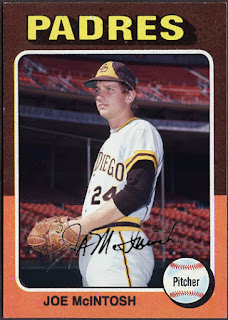 McIntosh appeared in 10 games for the Padres in 1974, going 0-4 with a decent earned run average at 3.62 over 37.1 innings of work.
Half of those appearances were starts, something that would increase the following season when he would make 37 appearances, with 28 of those starts as well.
In that 1975 season, which turned o0ut to be the last of his brief Big League career, McIntosh went 8-15 with an ERA at 3.69 over 183 innings, with four complete games and a shutout.
Following that season he was part of a trade to the Houston Astros that got the Padres Doug Rader, but I can't seem to find any reason why he never played between 1976 and 1978, not even in the Minors.
He did return to professional ball in 1979, still in the Houston organization, appearing in four games for the Gulf Coast League Astros squad and pitching nine innings, but that would be it.