Here's a fun card to "fix", the 1970 Sal Bando, showing the fact that he was the American League starting third baseman in the 1969 All-Star game: 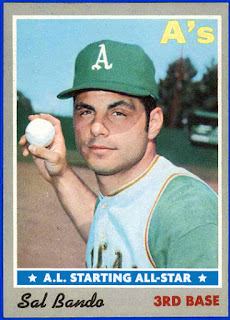 It's amazing to think that he beat out perennial All-Star and legend Brooks Robinson, but when you look at the season Bando put in that year, it was much deserved!
Bando had what turned out to be the best year of his 16-year career in 1969, hitting 31 homer while driving in 113 runs, scoring 106 and collecting 171 hits, all career-bests, while making his 1st All-Star team and finishing 16th in the MVP race.
A huge cog in the machine that would eventually be the three-peat World Champion A's teams of the mid-70's, he would end up making four All-Star teams over his career, while placing top-4 in MVP votes three times with a high of second place in 1971 when teammate Vida Blue took home the honors.
Bando put together a very solid 16-year career that saw him take home three championships, participate in four all-star games, and finish in the top-10 in MVP voting three times.
His five 20-homer and two 100+ RBI seasons were a nice compliment to Reggie's offensive exploits, and with Joe Rudi, Gene Tenace and Bert Campaneris thrown in you can see why those A's teams were so strong.
Then again, with starting pitching like Vida Blue, Catfish Hunter, Ken Holtzman, Rollie Fingers et al, yeah, they were going to kick-ass no matter what…
Posted by John23 at 6:42:00 AM