Here's a card I knew I'd be tackling one day, a 1974 fantasy card featuring a "dedicated rookie" for four-time batting champ Bill Madlock, the catch of course showing him as a member of the team he came up with in 1973, the Texas Rangers: 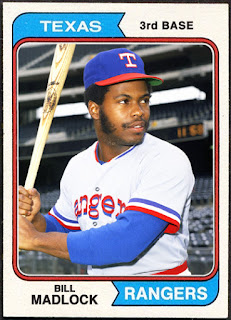 I already created a "dedicated rookie" years ago on the blog showing him as a Chicago Cub, but I figured another version as a Ranger would complete the "set".
He would put in 15-seasons under the Big League sun, hitting .305 with 2008 hits in 6594 at-bats over 1806 games between 1973 and 1987, while getting tabbed for three All-Star games.
Is he a Hall of Famer?
I’d say he falls a bit short, but then again, if there are NO other four+ batting title holders not in the Hall, does that raise the argument for Madlock?