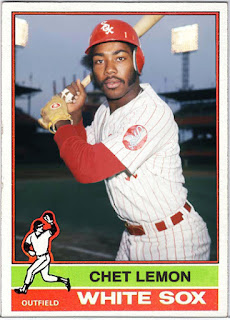 Lemon was featured on a multi-player rookie card in my favorite all-time set, 1976, as he appeared in nine games for the Chicago White Sox in 1975, hitting .257 with nine hits over 35 at-bats.

Lemon was only 23 when he made the first of three All-Star teams during his career in 1978, a career that saw him play for the Chicago White Sox and Detroit Tigers between 1975 and 1990.
Over that time he hit .273, with 215 home runs while being a part of the 1984 World Champion Detroit Tigers team that steam-rolled to the championship when they ran 1st place from wire-to-wire.
Never putting up any gaudy numbers, Lemon was just a great consistent player who put in solid statistics year in and year out.
He did lead the American League with 44 doubles in 1979, while also leading the league with hit-by-pitches four times between 1979 and 1983, but it was his reliable, steady performance that made him a valuable player over his 16-year Big League career.
A little fun fact I picked up this morning that I never realized: Lemon’s last career game, on October 3rd of 1990, was a game I attended and will always remember because that was the highly anticipated final game of the year against the New York Yankees at Yankee Stadium, and we all wondered if breakout slugger Cecil Fielder could hit his 50th homer of the season to become the first since George Foster in 1977 to reach that mark.
Of course, as we all know, Fielder did not disappoint as he crushed TWO bombs that game, settling on 51 homers in his first season back to the Majors after a year in Japan.
Fun stuff!