The next player added to my long-running 1971 "Minor League Days" lineup is former Detroit Tigers slugger Willie Horton, who tends to get overlooked for his era: 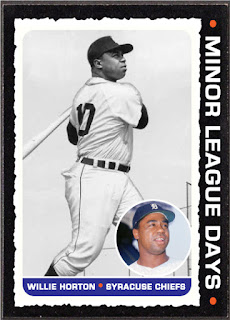 Horton was playing what turned out to be his final Minor League season in 1964, playing for the Syracuse Chiefs and having a very nice season that saw him hit 28 homers with 99 runs batted in as a 21-year-old.
He'd get the call up to the Majors at the end of the year, playing in 25 games, and would be up for good the following year, a season that saw him named to his first All-Star team while finishing eighth in the A.L. MVP race.
It's easy to forget how good a career Horton put together between 1963 and 1979 with all of his contemporaries stealing the spotlight, but a quick look at what he accomplished on the baseball diamond is nothing short of impressive.
In 18 years as a big league outfielder and designated hitter, Horton slammed 325 homers with 873 runs scored and 1163 runs batted in, with a .273 batting average and just under 2000 hits (1993).
14 of his 18 seasons in the sun were spent in the Motor City, where he was an important member of their world championship team of 1968, hitting a career high 36 home runs while driving in 85 and batting .285 (in a season where Carl Yastrzemski won the batting title with a .301 average).
He topped 20 homers seven times in his career with three 100+ RBI campaigns, on his way to four all-star selections and two top-10 MVP finishes (1965 & 1968).
He finished up his career as a designated hitter, and in 1979 had a comeback year at the age of 36 that saw him hit 29 home runs with 106 RBI's while collecting a career high 180 hits with the Seattle Mariners.
After a partial 1980 season that saw him play in only 97 games, he was released by Seattle just before opening day in 1981, and though he did sign with the Pittsburgh Pirates soon afterwards, he never played a Major League game again, closing out a nice career after 2028 games and 7298 at-bats.
Posted by John23 at 5:58:00 AM