Today on the blog, I am finally "fixing" a card that I'm sure many of you would NOT want fixed, the classic 1978 card for former pitcher Mike Paxton, who had himself quite an airbrush job.

Here's what Topps had out there in the Spring of 1978: 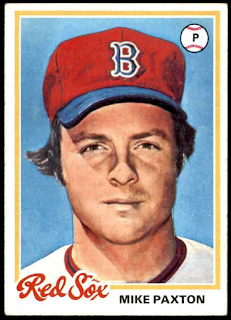 And now here is my re-done card with real image: 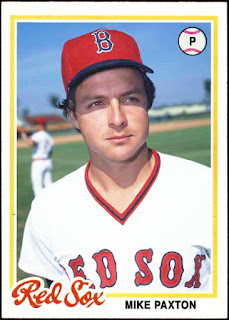 Always loved the 1978 Mike Paxton card, which along with the Greg Minton card from the same set and the Mike Jones card from 1977, made for some strange imagery on Topps baseball cards.
While Topps did it’s thing to airbrush caps and uni’s in the 1970’s to portray guys on the correct team, this one went above and beyond!
Looking at it, I’m assuming it was either a Minor League color image, or a black and white image that was colorized.
Classic Topps from the era!
Paxton had himself a very nice rookie year for the Red Sox in 1977, going 10-5 with a 3.83 ERA over 29 appearances, 12 of them starts.
Of course, the ultimate irony is that Paxton didn’t even PLAY for the Red Sox in 1978, as he was part of the Dennis Eckersley deal in March of 1978, sending him to the Cleveland Indians, where he had another nice year that saw him post a record of 12-11 with a 3.86 ERA in 33 appearances, 27 of which were starts, with two shutouts and a save.
Sadly for him, he developed arm trouble the following season, seeing his ERA balloon to 5.92 while going 8-8 before managing to appear in only four games in 1980 before calling it a career.
Posted by John23 at 5:39:00 AM