Today on the blog I’ve come to a “not so missing” card creation that had me second-guessing myself: do I go and create a card for a man who hurt others as well as himself later in life?
I do my best to stay away from such things on the blog, but I went ahead and created a 1976 card for former reliever Donnie Moore, a tragic figure in Major League Baseball’s history: 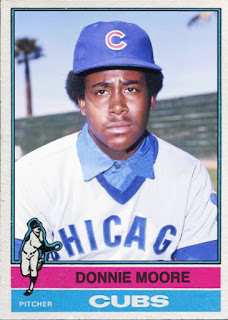 Moore made his MLB debut in 1975 with four appearances, one of those a start, for the Chicago Cubs, posting and earned run average of 4.15 without a decision in 8.2 innings.
He would go on to spend the rest of his 13-year Major league career as a reliever with the Cubs (1975-1979), St. Louis Cardinals (1980), Milwaukee Brewers (1981), Atlanta Braves (1982-1984) and California Angels (1983-1988), having his best years with the Angels.
In 1985 he would be named to his only All-Star team and get both MVP and Cy Young consideration when he went 8-8 with an ERA of 1.92 along with 31 saves, easily his best year in the Big Leagues.
Between 1975 and 1988, he’d finish his career with a record of 43-40, with an ERA of 3.67 and 89 saves over 416 appearances and 654.2 innings pitched.
Sadly, he will always be remembered for what happened about a year after his career ended when he shot his wife (who survived), and then killed himself in their home, with some unscrupulous journalists taking this as a chance to try tying it to his blown save in the 1986 ALCS against the Boston Red Sox.
On a personal note, when this happened I was a journalism major in college, eventually finishing up my degree a couple of years later, but this was one of the nails in my coffin as far as continuing as a reporter/journalist was concerned.
The way sports writers tried twisting the story to connect it to baseball to garner more eyes to their columns was disgusting, and helped me see what a joke it all was.
Just my two cents for what it’s worth.
Posted by Giovanni Balistreri/ WTHBALLS at 6:14:00 AM