Fun card to add to the 1979 stable, a Terry Cornutt “not so missing” creation for his brief, and I mean very brief, tenure as a Major League pitcher in the decade’s last season: 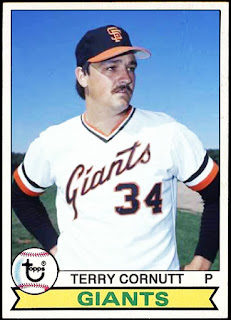 Cornutt, who made his Big League debut the previous year with 28 games and 44.1 innings pitched for the Giants, appeared in only one game during the 1978 season, pitching a total of three innings on September 15th, a successful scoreless appearance against the Cincinnati Reds.
Sadly for him that would be it though as far as his MLB career, as he would go on to play the next two years in the Minors but never getting a chance to make it back to a Big League mound again.
In his brief two-year career, Cornutt finished with a record of 1-2, with an earned run average of 3.61 over 29 games and 47.1 innings pitched, all but one of those games out of the bullpen.
Posted by Giovanni Balistreri/ WTHBALLS at 5:36:00 AM