Today I thought I’d love to post up my 1974 special card of the Oakland A’s trio of 20-games winners from 1973, Vida Blue, Catfish Hunter and Ken Holtzman: 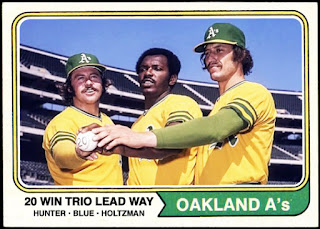 The A’s would march on to their second straight World Championship that season, led by the 62 combined wins of the three starters, with Hunter and Holtzman posting 21 wins and Blue coming in at 20.
The team would post a record of 94-68, beating the Baltimore Orioles in the Playoffs 3 games to 2 before proceeding to beat the New York Mets 4 games to 3 in the World Series.
It was be the last time a team would have as many as three 20-game winners in the same season, with the 1989 A’s coming close when they were led by Dave Stewart’s 21 wins, with teammates Mike Moore and Storm Davis coming in at 19.
It’s also worth noting that in 1989 the A’s also had Bob Welch come in with 17 wins. Amazing to think just how close they were to have four 20-game winners.
Posted by Giovanni Balistreri/ WTHBALLS at 6:45:00 AM