Up on the blog today, I came across an amazing unissued 1977 proof card for former outfielder Pat Kelly, showing him a member of the Baltimore Orioles after coming up with the Chicago White Sox. Take a look: 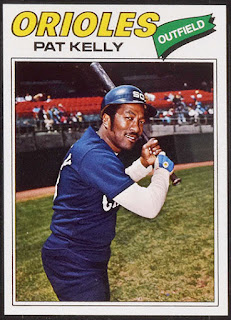 After six relatively successful seasons with Chicago, Kelly found himself a member of the Orioles after being traded for catcher Dave Duncan in November of 1976.
Topps had enough time to get him airbrushed into his new uniform, but not before laying out their sheets for the upcoming 1977 set, giving us some unique proof-cards that were "fixed" before printing began.
For those that need a refresher, here's the as-issued Topps card that year: 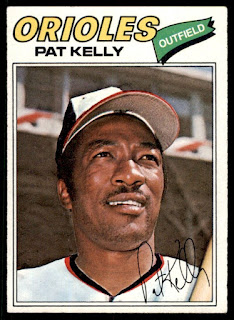 A solid fourth-outfielder over his 15-year Major League career, Kelly was an All-Star in 1973 while with the White Sox, pretty much setting career-bests across the board while hitting .280 with 154 hits and 77 runs scored.
By the time he retired after one season with the Cleveland Indians in 1981, he finished with a career .264 average, with 1147 hits over 4338 at-bats in 1385 games between 1967 and 1981, playing all three outfield positions while getting some DH time in as well.
Posted by John23 at 5:55:00 AM