Thought it'd be fun today to take a closer look at former All-Star Gene Tenace and the airbrushing done for his 1977 Topps card: 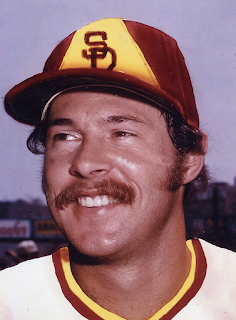 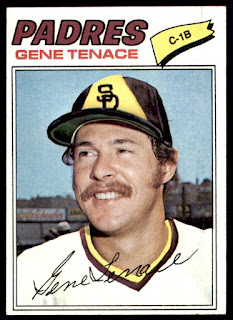 Tenace was coming off yet another solid year for the Oakland A's in 1976 before fleeing via this new-fangled "Free Agency, along with a slew of other teammates, and decided to sign with the San Diego Padres down the road a bit, as did A's teammate Rollie Fingers.
Topps definitely had their hands full with the former A's and their new teams, having to put the airbrushing tools through some extensive work to get them on the correct team for the 1977 set.
Tenace was as solid as they came for the juggernaut A's dynasty of the mid-70s, giving the team a versatile leader who was an on-base machine with some decent "pop" in his bat.
As a matter of fact in three different seasons Tenace collected more walks than hits in full seasons where he walked over 100 times.
Part of the first big wave of Free Agency, as stated earlier he’d move on to the San Diego Padres in 1977 where he’d play for four seasons before playing for the St. Louis Cardinals in 1981 & 1982, then one last season in the Big Leagues with the Pittsburgh Pirates in 1983.
By the time he retired he ended up with a .241 career average, with 201 homers and 674 runs batted in, with 1060 hits and 984 walks over 1555 games and 4390 at-bats, with an All-Star start in 1975.
Posted by John23 at 6:32:00 AM