Thought it'd be fun to go way back and revisit my blog post from March 14th of 2014, featuring a "fantasy" rookie card featuring four pretty good infielders making their Big League debuts about that time: 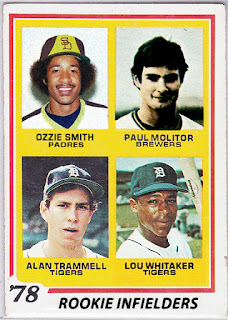 Now, would THAT have been a rookie card to collect or what!?
Of course three of the four would indeed have their rookie appearances in that wonderful 1978 set: Paul Molitor, Alan Trammell and Lou Whitaker.
However that fourth player, legend Ozzie Smith, would have to wait until the following year to get his baseball card debut.
Here's the original post I wrote up back then:
"Yeah I know, I'm pushing it imagining a once in a lifetime rookie card like this.
Topps didn't even have a rookie card for "infielders" in their 1978 set.
But man, what a card THIS could have been! Two Hall of Famers and two others who arguably should find their way in at some point.
Of course we all know that Molitor and Trammel were on the same card in the 1978 set, making for an already fantastic rookie card for collectors.
But with Whitaker on another card, and Ozzie Smith ignored altogether that year, I took all four of them and created a "dream-card" for people that care about these things!
It reminds me of the dream-card they gave out at a card convention years ago that featured Tom Seaver and Nolan Ryan on a 1967 rookie card.
Can you imagine how incredible that would have been?! To have a rookie card featuring THOSE two?!
Could have been THE rookie card for the decade…
Oh well, hope you all can at least enjoy THIS creation here…"
Posted by John23 at 6:35:00 AM