Up on the blog today, we add the great Lou Brock to my thread featuring the cards that were part of my two-series 1970 "In-Game Action" sets released over the past few months: 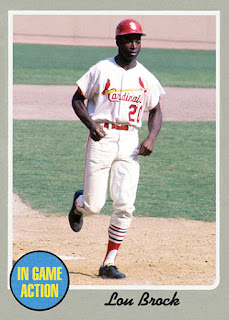 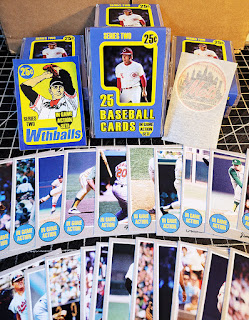 Brock really was an under-appreciated player in my book, having to get what little spotlight he could playing the outfield in the National league when you had guys like Mays, Aaron and Clemente there as well.
Nevertheless, the man made six All-Star squads, finished second in the MVP race for the National League in 1974, and would go on to a Hall of Fame induction thanks to 3000+ hits, an MLB record 938 stolen bases, and 1610 runs scored.
Did you know that between 1964 and 1974 the LEAST amount of hits he collected in any one season was 182?
As a matter of fact in those eleven seasons he collected over 190 hits eight times, while scoring less than 90 only once.
Just an incredible, “quiet” Major League career rarely matched before or since, without all the fan-fare outside of his 1974 season when he shattered the MLB stolen base record with 118.
Heck, even his last season of 1979, at the age of 40, Brock hit .304 with 21 stolen bases over 120 games and 436 plate appearances.
All-out legend.
Posted by John23 at 6:36:00 AM