Thought it'd be fun to revisit an old blog post from over six years ago, my "Missing" 1972 In-Action card for Lou Piniella of the Kansas City Royals, which was a really fun thread where I created a bunch of missing 1972 In-Action cards Topps should have had out there: 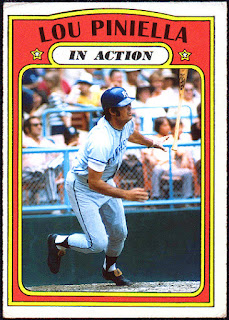 Here's the original blog post write-up for that day:
"Piniella was establishing himself as a solid Major League player, already taking home the American League Rookie of the Year in the 1969, the Royals inaugural season, and just putting in consistent numbers every year there.
After being traded to the New York Yankees before the 1974 season, Piniella found his permanent home in the big leagues, playing the final eleven seasons of his career there.
Along the way he was a member of two championship teams, hit .300 or better five times, and eventually would even become manager of the Yanks before moving on to a long career leading Major League squads.
Over his 18-year career he hit .291, with 1705 hits in 5867 at-bats, and besides 10 games split between the Orioles in 1964 and the Indians in 1968, he'd do it all with the Roylas and Yankees between 1969-1984.
In 1986 he took over as Yankee manager, and would go on to manage for another 23 seasons, guiding the Yanks, Reds, Mariners, Devil Rays and Cubs.
He would lead his teams to a World Series win in 1990 (Reds), an American League record 116 win season in 2001 (Mariners), eight 90+ win seasons (all but the Devil Rays), and six 1st place finishes (with the Reds, Mariners and Cubs).
Not a bad career spanning 46 years!"
Posted by John23 at 5:33:00 AM