On the blog this fine day, we have a career-capping 1979 card for former catcher Larry Johnson, who appeared in three scant games for the Chicago White Sox during the 1978 season: 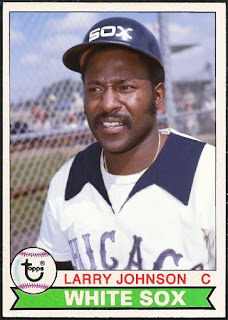 After a full season in the Minor Leagues in 1977 Johnson made it back to the Majors in 1978, albeit for those three games, collecting a single and a walk over nine plate appearances.
It would be the last action for him as a Major League catcher, playing parts of five seasons with the Cleveland Indians, Montreal Expos and White Sox.
However over those five seasons he only played in 12 games total, appearing in one game each of 1972, 1974 and 1975, six for the Expos in 1976 and the three games in 1978.
Over those dozen games, he collected five hits in 26 at-bats, "good" for a .192 batting average with a run scored and an RBI.
This is the third card I've created for him for the blog over the years, with a 1973 and then a 1975 coming before today's custom.
Gotta respect those "cup-o-coffee" Big Leaguers!