Today's blog post has a "not so missing" career-capper for former outfielder Orlando Alvarez, he of a 25-games Major League career spread out over four Big League seasons: 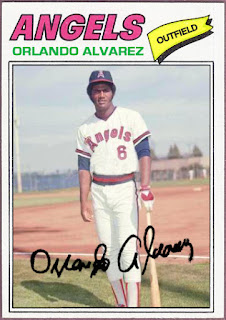 After three years as a Los Angeles Dodger where he only appeared in 10 total games, Alvarez remained "local" and played in 15 games with the California Angels in 1976.
Over those two-dozen+ games he hit .167 with seven hits in 42 at-bats, scoring four runs while driving in eight with two homers and a double.
He would spend 1977 and 1978 bouncing around the Minors for four different organizations before calling at a career, finishing up with a Big League resume that included 25 games, with eight hits over 51 at-bats, good for a .157 batting average, with four runs scored and eight RBI's.
Posted by John23 at 5:37:00 AM