Today on the blog, just for the fun of it, we have a "not so missing" 1966 card for the great Satchel Paige, a card that was featured in my last custom set the "Whole Nine": 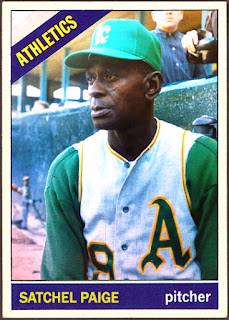 On September 25th of 1965, as a publicity stunt by the publicity-loving Charlie Finley, owner of the Kansas City Athletics, the 58-year-old Paige was "signed" to pitch a Major League game.
Twelve years removed from his last Big League game, the incredible ageless one did not disappoint, as he pitched three innings of scoreless ball against the Boston Red Sox, allowing only one hit while striking out a batter.
Just phenomenal, and adding to the legend that was Satchel Paige!
From his start as a 20-year old playing for the Birmingham Black Barons in 1927 to his final Major League appearance as a 58-year old for the Kansas City Athletics, Paige became an American icon not only for his on-field play but for his infectious personality.
Though his career Negro League record is listed as 100-50 over 18-seasons, he won countless other games along the way, as was the usual for the Negro Leagues as they played exhibition and non-league games during gaps in their schedule.
His stories are legend, enough so that by the time the Baseball Hall of Fame got off their ass and finally began electing Negro League all-time greats to Cooperstown, Paige was the very 1st to be so honored.
A 5x time Negro League all-star, 2x American League all-star, Negro League champ in 1942 with the Homestead Grays, and Major League World Champion with the 1948 Cleveland Indians, Paige left a baseball legacy that few could come close to.
This card was one of 16 produced for my "Whole Nine" set, which also had full statistic backs in my October, 2021 set.
Featuring other fun cards "that never were" like 1959 Ted Williams, 1933 Delong Babe Ruth, 1966 Steve Carlton, it was available for a short time through yours truly.
Posted by John23 at 6:24:00 AM