Really fun card to add to the blog AND my on-going 1972 All-Star "missing" sub-set today, a card for the National League's starting pitcher in the 1971 Midsummer Classic, Pittsburgh Pirates pitcher Dock Ellis: 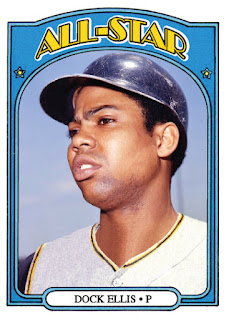 Ellis was on his way to his best year as a Big League pitcher in 1971, and with that was given the honor of starting what turned out to be one of the historic All-Star game in baseball history, featuring somewhat of a transition of the "old" classic baseball of the 1950's and 1960's with stars like Willie Mays, Hank Aaron and Roberto Clemente, while also showcasing young up and coming superstars of the new age like Johnny Bench, Reggie Jackson and Rod Carew.
By the time 1971 ended Ellis finished with a very nice 19-9 record for the eventual World Champions, sporting an earned run average of 3.06 over 31 starts, with 11 complete games and two shutouts, tossing a career-best 226.2 innings.
Those numbers would get him a fourth place finish in the Cy Young Award race in November, with Chicago Cubs great Fergie Jenkins winning it based on his league-leading 24 wins.
Of course, we would be terribly negligent here without also mentioning that Ellis was the pitcher who served up the classic bomb hit by Reggie Jackson in the All-Star game that almost cleared the ballpark, a moment that marked somewhat of the arrival of the man who would go on to be nicknamed "Mr. October" and become a household name across the country by decade's end.
Nevertheless, Ellis would go on to pitch 12 years in the Majors, finishing up after the 1979 season, posting a final record of 138-119 over 345 games, 317 of them as a starter, tossing 14 shutouts and striking out 1136.
Posted by John23 at 5:39:00 AM